The Watford & Bushey Art Society was formed in 1921. Watford, once a sleepy market town, was expanding and thriving, largely due to the growth in its flourishing printing and paper industry.

Close by, the picturesque village of Bushey still retained the remnants of the community of artists and sculptors who were drawn to the area by the once famous (or infamous) school of art, founded in 1883 by Sir Hubert von Herkomer RA and later run by his protégée, Lucy Kemp-Welch.

It was at the home of Mr. F R Williams that eight men, all working for local printing companies, decided to form the “Watford Art Society”. Mr Williams was appointed as its first secretary (and was still exhibiting his paintings in the Society’s exhibition in 1979 – aged 87).

The Society’s name was changed to include ‘Bushey’ in the early 1940’s to reflect the increasing number of members from that area.

From the outset the Society’s members were anxious to exhibit their work. The first exhibition was held in 1922 and, apart from the war years, the Society has held a major exhibition every year since.

The absence of a purpose-built art gallery in Watford was bemoaned by local councillors as early as 1936. Annual exhibitions were held at the central library. With the focus of Watford moving to the High Street, and the lack of parking, it was time for a change. In 1992 the Society moved its annual Spring Exhibition to the newly built Harlequin Shopping Centre (now INTU Shopping Centre), with its purpose-built gallery above the Upper Mall.

NOTE – MEETINGS HAVE RETURNED TO ZOOM PRESENTATIONS FOR THE SAFETY OF OUR MEMBERS. WE HOPE TO RESUME LIVE MEETINGS AT TENNET HALL, WATFORD GRAMMAR SCHOOL FOR GIRLS IN THE SPRING!

Please visit the Events Calendar for more information about our meetings every month.

YOU ARE INVITED TO JOIN US. For £32 you can enjoy twelve monthly meetings throughout 2022, together with lots of other benefits of membership. Please see the Join Us tab for details. 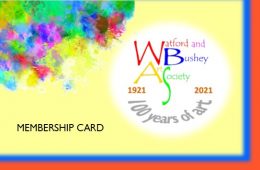